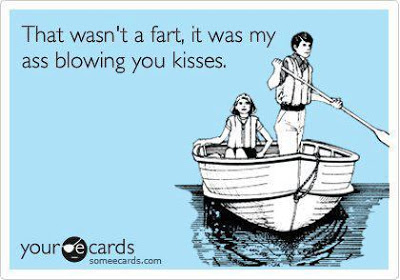 I am sure that since childhood, you have seen men farting unabashedly. They might be the men in your family, friends, male co-passengers in public transport or random men. They are mostly excused for their demeanor and seldom rebuked for it. In case of men, farting is as natural as speaking. After-all farting is absolutely a man thing, isn’t it! Farts are discussed, analyzed, reviewed and even nicknamed. But what about women?
As a kid, I actually believed that women don’t break wind (a better word for fart, now that I am talking about women); that it is a phenomenon applicable only to men. Then I slowly grew up. I observed that women who broke wind in the presence of other women were ridiculed and made fun of. Breaking wind in the presence of men is still an unknown phenomenon. So I learned that women are not supposed to break wind in front of anybody. Another social dogma. 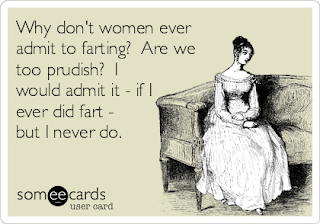 I have no brothers of my own and have grown up with only one male in the house, my father. And he farts all the time. I share my marital home with five males and one female. So farting is usual business here too. But I have never seen (heard, felt, smelled, whatever) any female relative or friend, or any acquaintance for that matter breaking wind openly; except for the sudden bouts of foul smell in the women’s compartment in the metro sometimes. But I do know women who burp ferociously. So it makes me wonder if women have learned to channelize their flatulence upwards instead. 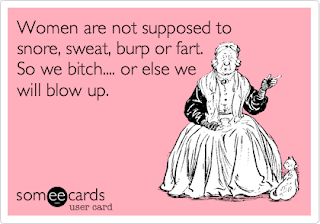 In our societies worldwide, behavioural as well as habitual aspects are categorized as masculine or feminine. Snoring, sweating, burping, farting, smoking, drinking (in most cultures) or swearing/cursing are an absolute no-no for women. Which cultured lady does all of these? But they are perfectly okay for men though. On the other hand, tears, physical weakness, fear, gentleness, caring nature, household chores are considered unmanly. In fact not smoking or drinking is considered unmanly.
Fart/Breaking wind is defined as “a reflex that expels intestinal gas through the anus” (Noun) or “expel intestinal gas through the anus” (Verb). So, it is a natural phenomenon for all human beings. The only difference is that while a man does it outrageously and openly, a woman has gained more control over it and wait for moments when she is alone or in a crowd where she will not be heard or pointed out. 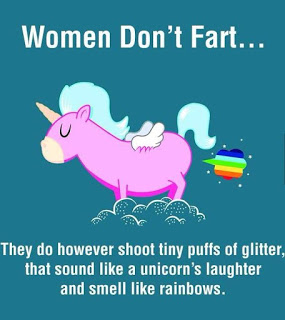 I was recently reading an article where a woman was sharing how her husband rebukes her if she accidentally breaks wind in his presence, while he did that all the time. Readers remarked that her husband is ridiculous, arguing that couples who fart in front of each other and laugh about it are not pretending about anything and have healthier relationships. There are other articles where it is said that women who fart unabashedly are real women and that they are not oppressed by social norms.
I personally believe that farting in presence of other people is only a case of etiquette. If it is considered manner-less for women to fart in public, it should be true in the case of men too. If little girls are taught to control their farts till they are alone, little boys should be trained similarly (instead of being amused when they do that). But I also know this is not going to happen in ages. As long as we are alive, we have put up with men farting around us pathetically. And the only thing we can do is cover our noses or hold our breath.

9 thoughts on “The Fart Thing”