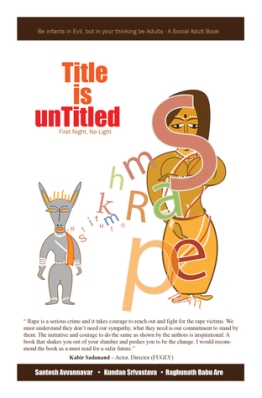 The blurb of the book says:
Rape is a serious crime and it takes courage to reach out and fight for the victims. We must understand they don’t need our sympathy, what they need is our commitment to stand by them. The initiative and courage to do the same as shown by the authors is inspirational. A book that shakes you out of your slumber and pushes you to be the change I would recommend the book as a must read for a safer future. – Kabir Sadanand – Actor, Director, FUGLY (Mumbai)

Love. Lust. Desire. Rape. Anger. Education. Profession. Maladies of life? Title is Untitled helps us into a sneak peek at a unique combination of facts and fiction. Three authors join their heads to weave a book that would hold fact high along with fiction. You knew the statistics, but you didn’t know the paths that lead to the situations we are facing these days. Coupled with adequate dose of humour, Title is Untitled will enhance, enrich and enlighten your knowledge. Come, join hands with us in spreading knowledge and awareness about issues that are plaguing our society now.

Overview of ‘Title is Untitled’
To look at things like we’ve never looked at before – we present a unique book of facts blended with fiction to spread more awareness in our society. Facts about various problems in the present urban and rural societies of India are presented wrapped in fiction, like case studies to elaborate them.

Women of our country are often victims to most issues like rape, marital rape, prostitution, child marriage, child trafficking and others. Not to ignore the men who are also victims to women framing them in false cases of impotency and domestic violence. There are eleven chapters presented in this book which deal with different such cases – both men and women – and try to create a little awareness in our educated society.

The first chapter is a classic example of how many women are treated in our country, married off to older men or their own relatives at a very young age, hence deprived of education. Many women like Kamali are sold off in the name of marriage, only to be wronged and raped by their so-called husbands. The next two chapters showcase the myriad lusts and desires of women, only to be avenged later. Cheats and frauds are not gender-biased and this is reflected in ‘Ek Tha Kapoor’. We’d also like to take you back to 1957 in a superb case study of how people were wrongly framed during the freedom movement of India. Many such cases are still pending in the court of law.

The next three chapters provide some humour to the serious reader and let you loosen yourself while you read about relevant issues like Beggary and obtaining fake degrees. All work and no play make Jack a dull boy! Hence the dose of humour for your palate. The last chapter is bound to leave you in tears when you read about Ganga and how she had been trafficked into a brothel like thousands of other teen girls.

The question is – can we do something for them? We can at least be aware of the steps that lead to these sins and spread the awareness. We can try to stop people who sell young girls to brothels. We can stop marital rape in our own homes. Will we do so? Or just read the book and keep it in the shelf with a sigh?

About the author:
Santosh Avvannavar: Santosh started his career as a consultant and Soft Skills Trainer. After his college education from NITK, Surathkal, he worked as a researcher at University of Eindhoven, University of Twente, and Indian Institute of Science, Bangalore. He was also the Placement President while working at IISC, Bangalore. He has over twenty-five publications of mostly research documents in national and international journals. He has also authored sixteen conference papers and regularly writes articles for a national and worldwide daily paper. He also works as an advisor for different organizations.

He also dabbles in fiction writing and is the author of Adhuri Prem Kahaniya; Dear Wife, Your Husband is not a Superhero, Second Heart and Get a Job WITHOUT an Interview; Be A B.A.; Surrogate Author. He likes to devote his personal time in writing for a website, namely the Amrita Foundation for HRD (www.amritafoundation.wordpress.com). He has conducted seminars and training sessions for more than 40,000 people in India and abroad over the last seven years.

Kundan Srivastava: Kundan is an engineer by education, Founder of Be In Humanity Foundation, Social Activist, RTI Activist, Columnist, Universal Humanity Awarded (2013), Bihar Pithadhish Purushkaar Awarded (2012). He was born in Raxual, Bihar and is one of Youngest Social Activist from Bihar. Kundan is a Technical Graduate (B-Tech) from Dehradun Institute of Technology, Dehradun and the Top Achievers announced by College Management. He is well known for his role in Social Activist working for humanity cause and crime against Women, RTI Activist and his efforts to bring and awareness the Right to Information (RTI) act. From July 2013, he is a Member of political party, Aam Aadmi Party (AAP).

MY THOUGHTS:
As you can learn from the overview of the book, the book deals with various social issues like child marriage, rape, beggary, trafficking, etc. in a drama form. There are eleven chapters throwing light on eleven social issues. The writing is plain and simple. The book is a decent effort to create awareness about various problems which still plague our society. But I found the presentation of the issues nothing about ordinary.

One thought on “Book Review #27: Title is Untitled”