It’s Valentines’ Day eve and I woke up to the usual chirps of the greedy sparrows. I entered the kitchen and saw something flying out in a hurry from the exhaust fan’s  outside opening. The kitchen’s exhaust fan is right above the wash basin. And I found dry  pieces of twigs in the basin and  on the floor. I told myself that the sparrows are now trying to build a nest in the kitchen after I blocked their entry points in the living room. I found twigs in the attached balcony also. I cleaned up the area and took a chair to clean the area behind the fan too. Yesterday evening also, when I reached home from work, I found twigs. But I didn’t suspect anything. Just assumed that the wind must have blown them in.
I had bread today and so thought of feeding it to the sparrows instead of the regular rice grains. As I sat tearing up the bread piece, a spotted turtle dove (kopou) came and sat on the balcony grill, completely choosing to ignore me. When I entered back to the kitchen, it flew straight to the exhaust fan opening and made itself comfortable. And then it started cooing in its sweet little voice. And after a couple of minutes its mate came. On seeing that, I simply couldn’t help but smile to myself. And I knew I will be never be able to chase away this lovely couple from my home. The sweet things are simply trying to build a home. 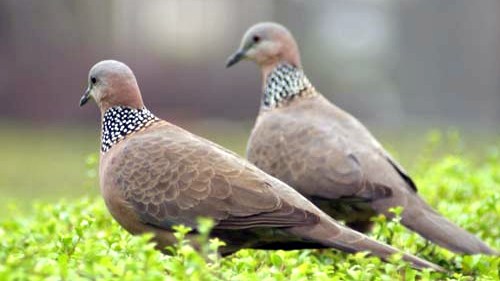 I am used to seeing kopou building nests. Back in our Jorhat house, I remember a young female kopou trying to build a nest. Her mate was killed by a terrible cat and she was a inexperienced expecting mother. She tried building her nest with a few twigs and leaves. Finally Deta felt sorry for her and helped her. Her egg was the cutest. As far as the cat is concerned, he was banished from our premises forever.
I came home from work tonight a little late. Had a early dinner with a couple of friends outside and didn’t really have much to do in the kitchen. Still I went there and switched on the lights to check on the exhaust fan area. And yes, there it was, looking straight at me. I assume that it is the female and the male is chivalrous enough to watch on her from outside. Of course, there were more number of twigs in the area below. I had a couple of utensils to wash and I tried to do that as quietly as possible. I called up my parents and told them about them. Maa said that it’s okay and they will behave like pets once they take home. So not to worry about waking them up with lights or noise after sunset. Deta said that it’s nice that birds are making nest in the house in the city.
So now I have a bunch of ever hungry sparrows to feed, a young dove couple to keep, few plants to water and a couple of local fishes to watch. Not a bad deal in a wannabe metro city, huh! For me, the dove experience is my valentines’ gift from nature. And I really really hope that the ‘lovey dovey’s stay around me for quite sometime now.