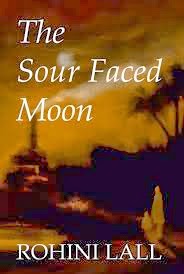 Name:          The Sour Faced Moon
Author:         Rohini Lall
No. of Pages: 251
Genre:           Fiction
Publisher:      Frog Books (An imprint of Leadstart Publishing Pvt. Ltd.)
Price:            Rs. 195/-
Published in:  2014
The blurb of the book says: Oscillating between the families of Imroz Agha Khan, who resents his prosperous Afghan forefathers and his perennial outsider status in his own homeland and Danielle Anderson, who returns to seek refuge in the truth and dreams she had so abruptly fled from twelve years ago. A story spanning three generations with malleability of rules as people try to break the bondage they have created all on their own. Rohini Lall’s debut novel, THE SOUR FACED MOON is the saga of intertwining cultures and generations.
About the author: Rohini Lall was born in Bhagalpur, Bihar and lives in Delhi. She has been an avid reader since a very early age and has a keen interest in classic literature, modern fiction, and poetry. She is interested in art, travelling and is a movie buff. The Sour Faced Moon is her first book. She can be reached at rohininlall@outlook.com
WHAT I FEEL ABOUT THE BOOK:
First of all, the cover did not appeal to me at all. The storyline had much potential and I felt that the author was lazy in giving out the details. Also, I found the sequence of the novel was quite haphazard and confusing. As a reader, I was hooked on the story, waiting that may be towards the end, all my questions would be answered. Like what was Danielle’s mother, Emma’s story; what exactly happened between Nicholas and Joshua; why did Danielle left twelve years ago; how was Bryan born and what is Deborah’s story. Mystery is a good thing in novels as it keeps the curiosity alive, but leaving the readers hanging in between is no good.
I also felt that each character should have been elaborated more. The story started with Zaamir Agha Khan who is understood to have traveled to and settled in India as a young man. What happened to him, what did he do on reaching the land he dreamed of living in, what were his struggles, nothing was given about his life. Then what happened with Nicholas, why did he leave his home, no answers here also. Same with Joshua. I felt the story of the two families, Khans and Andersons should have been parallel and more detailed.
As a first timer, the author has surely done a good job. I would give the “The Sour Faced Moon” 3 stars on a scale of 5. And this is for the potential plot of the book.