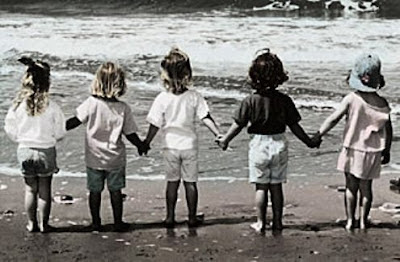 Most of us don’t need a psychiatric therapist as much as a friend to be silly with. ~Robert Brault

I am basically a loner. It is somewhat difficult for me to be with people for just the heck of it. When I am not working or sleeping, I spend my time reading, writing, watching a movie or creating something. You can say I am a loner by choice, but yet, many a times, I wish that I had a a girl buddy to do stuff together and most importantly pour my heart out to. I feel, every person needs a friend of their own gender.

Although I was a part of a big group in school, only a handful of us remained in touch after school. To be very frank, I am in touch with only three of my girlfriends from school. And since then I have made only a handful of girl pals. One interesting fact about my girl friends is that 90% of them are the eldest in the family like me. May be because of the same reason, we have similar thoughts and maturity levels and our wavelengths match.

On the eve of Friendship Day today, I would like to dedicate this post to the special girls in my life. Although we have been apart across time and place, all of them have a special place in my life and heart.

My little sister: Like most of the siblings, my sister and myself were not on friendly terms throughout our teens. But as we stepped out of our teenage shells, we started opening up to each other and became almost friends. I would have to say ‘almost’ because being the older one, I have always been protective of her and tend to lecture her on most occasions. But of course we share our lives. She is the most honest critic I have.

PH: She’s is my first best friend. I have known her since we were around 6 years old. Before our school vacations started, we would give each other hand-made ‘Happy Holidays’ cards. Her mother worked in the same university as Deta and we stayed in the university campus itself. So we exchanged letters during the vacation also through office peons! In the fifth standard, we were put into different sections and we both gradually made new friends. Although we do not talk regularly now, but we surely call each other on birthdays and in between to catch up.

PA: She joined my school in the fifth standard when we were 11 and we are still stuck together. She’s my best friend and we have shared our teenage years. We studied together till the 12th standard and the last two years of it, I have spent my time mostly at her place. For graduation, we were in two different places. But we never lost touch and the magic of our friendship. We would spend time together when I came home for vacations. But we were in the same university for our post graduation and shared the same hostel. We speak regularly and update each other on our lives. She’s my dearest friend and she has a golden heart. I love you girl!

AS: She and I were best of friends and each others’ secret keepers throughout our teens. Her father was transferred when we were in the 9th standard and they moved away to another town. My maternal grandparents were in the same town and so when we went to visit them, I would visit her place. Later in our graduation days, I would make it a point to meet her when I came home for vacations. But after she moved to another city for higher studies, we gradually lost regular touch. Now that we are in the same city, we are trying to catch up.

LM: She’s one of first friends I made when I started out on my post-graduation. She was my classmate as well as my hostel-mate. We used to go for classes together and have our meals together as well. Whenever we felt like having our favourite ‘chicken garlic chowmein’, we would go to a particular restaurant in the town. After studies, we were working in the same city and would meet now and then to chit chat and have our (another) favourite ‘steamed chicken momos’ or ‘chicken biriyani’. We would have heart to heart talks at lentgh almost every week. We still speak regularly and are updated on each others’ lives. She’s one girl I really admire and from whose life I draw as well as cite examples. She’s one special friend I have.

MP: We were classmates in post-graduation. Although we were not intimate friends, we had lot of fun time together, especially in the hostel, during assignments and practising our miserable dance steps. We shared our first 2 job places after passing out. So we were office buddies as well. Apart from gossiping and sharing daily matters, we often shopped, partied and went for movies together. Now I have left my job and moved to another place post-marriage. But we are still in touch and share news.

GB: She’s another friend I met during my post-graduation. Although she was from another stream, we were in the same hostel. We would have our dinner together and shared our day’s events. We would often gossip sessions in her room and have hearty laughs. While in job, we would meet now and then for chit chats and meals.We talk regularly over phone and have our heart to heart talks.

SS: She was my room-mate in post-graduation and she still calls me ‘roomie’. Although we did not talk much during the first year, the second year we were much closer. She was from another stream and we had different schedules. But we adjusted very well and had some great times together. I am a difficult girl to put up with and I am so thankful to her for putting up with me! And yes, we are very much in touch.

“Friendship is born at that moment when one person says to another: “What! You too? I thought I was the only one.” ― C.S. Lewis

One thought on “My Special Girls”

Join 115 other followers
Follow Natasha'z Points To Ponder on WordPress.com

Harry Potter, the eleven-year-old wizard who took the world by strom. Seven books in ten years, followed by eight films (with overlapping timelines), made him and his friends a household name among fantasy book and movie lovers. Originally intended for middle grade children, it has become a fantasy classic among children and adults alike.🧙‍♂️
#bookreview
#Repost @pr3ttypriceless
#bookreview
It's all about the perspective, of what you are keeping in focus... 👁️ (Swipe left)
#Repost @diabolical_nerds_bookshelf