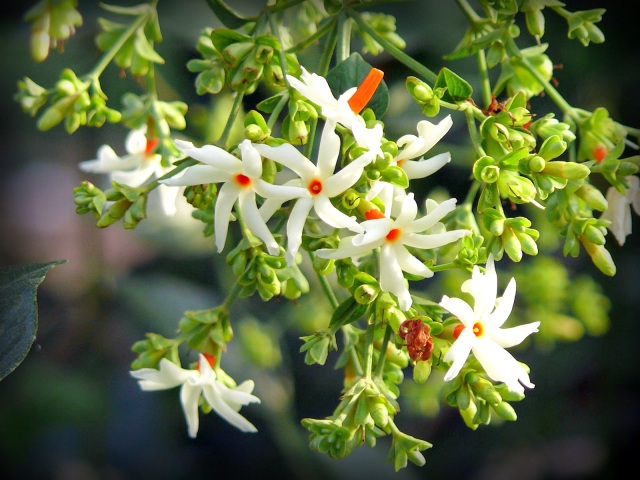 Common Name: Night-flowering Jasmine, Coral Jasmine
Scientific Name: Nyctanthes arbor-tristis
Assamese Name: Sewali
Sewali is a night-flowering tree with white flowers with orange stems. It is of two varieties, one flowers all the year round (perennial) and the other flowers only in the months of September-October (seasonal). The tree is also known as the “the tree of sorrow”, because the flowers lose their brightness during daytime; the scientific name arbor-tristis also means “sad tree”. The flower is the state flower of West Bengal, the eastern Indian state.
As the tree blooms during the night, by morning it sheds most of the flowers. We would find the ground below the tree strewn with the delicate flowers and we would collect them in small baskets. I remember making garlands out of them. In Assam, the flowers as well as the tender leaves are delicacies. The flowers are bitter in taste and are fried to be consumed. They are also dried and stored to be consumed later. The tender leaves are cooked as fritters. These fritters are one of my favourite Assamese delicacies.

I am taking part in the Blogging from A to Z Challenge [April 2016].

3 thoughts on “J for "(Night-flowering) Jasmine"”