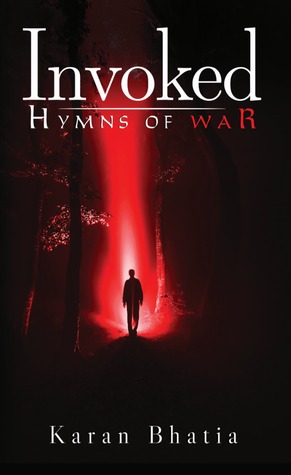 How did I get it? From the author.

Krishna is a common man, leading a simple and content life with his wife, daughter and parents. A twisted accident leaves the family shattered and exposed to attacks from the netherworld. The attacks are the small, but integral pieces of the bigger picture.
As the family fights back and Krishna struggles to prove himself as the man of the house, the darkest chapters from his past re-open, unleashing a torrent of pain and desolation. Krishna decides to embark on a spiritual journey to save his family.
Does he succeed?
How does his journey affect the impending war?
Invoked is the first book of the Hymns of War series.

Karan Bhatia lives in Bangalore and works with an international bank. He is an avid reader and a movie buff. In this first attempt at fiction writing, he delves with ease into the dark, fearful world of black magic and rituals with consequences incomprehensible to the mind, with the first instalment Invoked of the Hymns of War series.

Krishna’s life was a simple and a smooth one. But one death in the family triggers a series of unfortunate events laced with paranormal incidents. Bit by bit Krishna’s world is shattered and he decides to take matters in his own hands. But he is not aware that his present and his future are invariably linked his mystic past.
Durga is a powerful sorcerer following his father’s path in mysticism. An old family feud intertwines his life with that of Krishna in unexpected ways.
It is a well-written book with elaborate yet engaging descriptions. It is an engaging read for anyone who is interested in supernatural powers and beings. The plot consist of sorcery, witches, spirits and science. The author has done some commendable research on the subject of invoking the higher mystic powers and black magic. Apart from a minor mismatch in mentioning Krishna’s daughter’s age at one place, there are no other lapses in editing.
The author has done a laudable debut job. This is the first book of his “Hymns of War” series.
I give “Invoked (Hymns of War)”